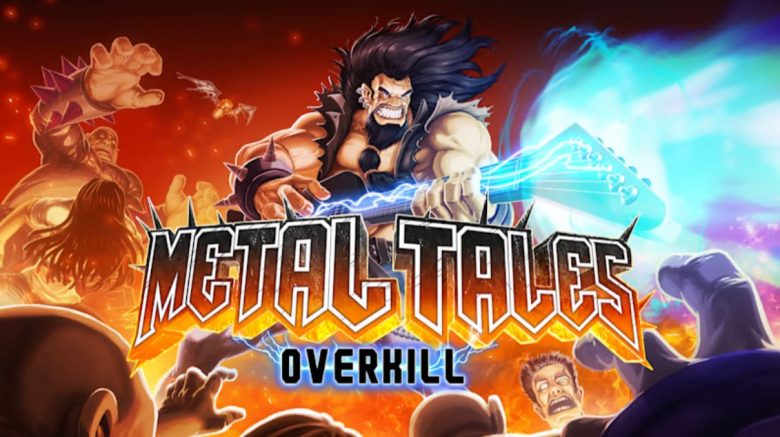 Metal Tales: Overkill is a top-down Rogue-like action-adventure shooter. You play as one of four guitar heroes fighting to liberate your Metal brothers and sisters from an evil curse that has taken over them. Turning them into possessed monstrosities. Who will relentlessly attempt to hunt you down.

Spoiler alert; game is a masterpiece ! I am -of course- slightly biased as I am a huge metal music fan. And the setting for this game was basically my entire 20’s. So, I’ll admit that I have a soft spot when it comes to reviewing video games with the heavy metal themes. However, Metal Tales: Overkill’s variety in weapons, power-up items, enemies and bosses, and headbanging soundtrack truly has earned it it’s place among my top favorite rogue-likes. And I am willing to bet it’ll appeal to the non-metalhead gamer as well.

Rogue-likes for the unfamiliar, are games that give you just one life to beat the game. And expect you to die A LOT. And with every run you collect some currency for upgrades and power-ups that you can use in subsequent runs. So, basically the granddaddy of the Dark-Souls genre. And the levels are procedurally generated from a semi-set collection of “dungeon” rooms. So each run shouldn’t feel repetitive or boring.

In Metal Tales: Overkill, Your guitar hero’s quest takes him fighting in different “dungeon” rooms. Varying from normal fight rooms filled to the brim with enemies. To trap rooms that award you with a cool power-up if you manage to survive the deadly contraptions. As well as Challenge rooms with ever-spawning enemies, Boss rooms, and Shop-rooms.

In the overarching theme of heavy metal music. Every little bit of the game is crafted to be a treat to the metalhead gamer. The Levels are set in concert arenas such as: grungy bars, metal festival grounds, and hell itself ! The power-ups are all guitar pedals, strings-sets, and guitar amps. And your weapon of choice is of course the true battle-axe: an electric guitar that shoots projectiles. Arguably the coolest assault weapon. Who has time for guns, amirite?

The best part of the game, aside from the god-tier original soundtrack of licensed music from international metal artists. Which in itself is a more than good enough reason to support this game though a purchase, or add it’s OST to your Spotify. But it is actually the local Co-op gameplay option, where you can take on your enemies, and slay those metal beasts with your buddy of choice. Now I’ll admit that I’m more of a handheld gamer so I almost-exclusively play Solo. But when I gave the co-op mode a try for this review it blew me away, and I think docking my switch and playing with a friend is definitely my favorite way of enjoying this masterpiece so far.

Is it a 10/10? not-yet, but it can be. The game suffers from a bit of “dodgy controls syndrome”. Where I can’t use my right stick to organically aim at whichever angle I’m tilting my stick at. And it seems that the game instead shoots only at fixed 8-way axis of the four primary directions and the four secondary ones. Which is a bit of a snag in a shooter game. And, if I’m nitpicking, the game doesn’t really explain all that well what each pick-up or store-purchased power-up actually does. So you’re kept guessing and waste a few coins here and there. But It does get the player curious to try out the different pick-ups for themselves to figure out what they are, and that indeed adds variety to the play styles. so, actually I think good job on that Zeruno Games.

Every time spent playing this game to write this review has definitely been the highlight of my day. And I deliberately stretched the deadline for issuing this review to the max so I could play some more. Kudos to the dev team, and if an update comes up to fix that aiming issue I wouldn’t shy away from giving this title a perfect score !

Special Thanks to Zeruno Games for providing a review code.