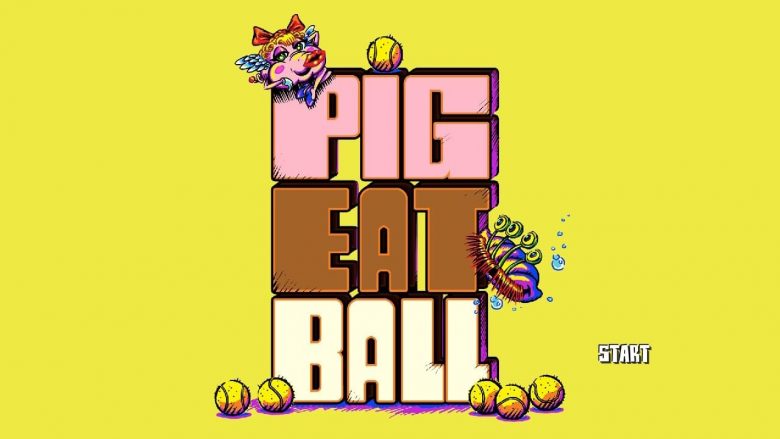 Pig Eat Ball is the latest game by developer Mommy’s Best Games. It’s a curious title, and if you think it sounds strange..Just wait until you load up the game and start playing!

To begin with, the story goes…The cake king decides to marry off his daughter, the princess. In order to find the best suitor, the king organises an event called “The Games”. The winner gets the princess’s hand in marriage, but the princess has other ideas.Heavily disguised, she decides to enter and the win the games herself.. On the way, she discovers a plot to destroy the space station kingdom. Can she stop the plot and also win the games at the same time?

Yes, it’s wacky to say the least. Your princess character, wearing a pig head and wings, negotiates each space station area that is full of odd characters and labyrinthine in nature.

Players get a total of 5 space station worlds altogether. Each station containing a vast array of characters and hidden secret rewards, all interlocked to allow players to venture between them.There is a vast amount to do and discover, which is immediately apparent once playing.

Characters come in a wide range of alien variants. Cupcakes, shrimps, goblins are just a few with pillbugs (be careful!) playing sports on the station as you walk around looking and investigating its strange and diverse areas. .

Naturally, the core gameplay is what matters and by approaching a talking clam (please bear with me..) You can participate in the games themselves.Here, the princess has to negotiate a maze filled with moving balls. Eating each ball will gradually cause her to grow bigger and fatter but then, should a ball move into a narrow area, she can become wedged and unable to move.

Luckily, the princess can remedy this by barfing up balls in order to reduce size and continue chasing her objective. Losing balls with each barf, however, can delay the time collecting the set number of balls in each game.

Barfing has other uses though. Such as barfing on the aliens littered around, can reap special bonuses and uses. A handy boost of speed can also be applied to move onto conveyor belts, areas of luggage, although I would say, caution is needed with the many spikes, objects and aliens causing slowdown and damage,thus losing valuable time.

Get a decent time and clearing all balls gets graded,naturally with medals, in their respective Bronze, Silver and Gold.Importantly, players may need a certain amount of gold medals or a bonus pearl(after all, it is a clam) needed to unlock new areas in the station. There is replay value in each game, and every game requiring quick thinking and strategy to succeed in all of the madness.

This game is definitely deep enough, with the player surrounded by unknown obstacles and adversaries in an interactive twisted open world setting.It never tires or fails to surprise.

12 formidable bosses are scattered about the many levels, including a centipede and a bag of nachos!? and there are also bonus disguises to find, granting buffs/hindrances depending on the levels. Experimentation is obviously the key here

Visuals are instantly pleasing, with a retro comic book look in the animations and colours, and although there are instances of blur in the gameplay, it appears natural and by no means a drawback or a flaw. Combine this with a soundtrack of varied quirky tunes, and we get a game here that has clearly had a lot of time and effort spent on it.

Modes include the standard story mode at around the 10 hour mark. A 4 player couch offline Co-op for fun with friends and online leaderboards to match scores with global players.

To summarise, it’s evident that the core gameplay roots borrow from the arcade classic PacMan. Developers though, have added loads of elements on top of this, to make a game that’s fresh, unique and engaging.

It may seem like an odd title, but rest assured, there is a great game hidden under the apparent silliness and craziness surrounding you,granting fresh exploration and fresh challenges.

At a reasonable price of about $15/€14, there is also value for money to boot!

Thanks to Mommy’s Best Games for the code.

Tags: ball, eat, Pig
Summary
Pig Eat Ball is a fun and addictive title for Switch. It's world doesn't bore you with plenty to see and do between its many levels of ball pigging action.
Good
Bad
7
Good
Graphics - 6.5
Sound - 6.5
Gameplay - 7.5
Value - 7.5