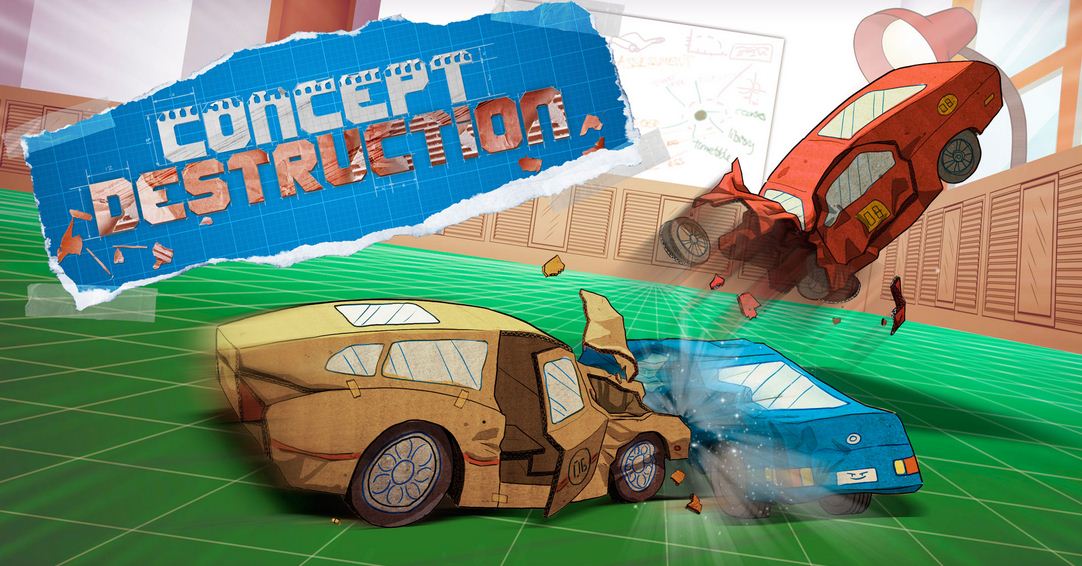 Concept Destruction is a vehicular combat game, the spiritual successor to the 90’s blockbuster; Destruction Derby. An Arena-style car combat, where last car alive wins, or by the end of the round timer, the car with the highest destruction score.

A flurry of fun and good ideas, Concept Destruction is absolutely flawless; the car combat, a game genre truly missed in this generation, combined with an utterly kickass soundtrack, and a unique visual style. I cannot fault the game in a single aspect, and have to admit that the time I spent playing it was without a doubt the most fun I’ve had in a while !

The story in Concept Destruction is slightly goofy, the player is supposed to be a car designer, and they test their designs by making little cardboard models, and let the cars duke it out in a free-for-all combat arena mayhem. This less-than-stellar backstory paves the way however for an extremely creative and fun setup; the arenas you fight in are made of pizza boxes, soda cans, stationary, and more, and you always have to watch out from falling off the designer’s work-bench.

The player can choose Championship mode, which lets you try out all the different combat arenas, as well as collect points to unlock more cars, each with their own driving style, and strengths and weaknesses. While other modes include survival which has waves of opponent cars trying to wreck yours and your goal is to survive the maximum number of rounds, then there’s tourist mode, where your car is invincible, a bit like playing with cheats enabled, you can use this mode to explore the different arenas, and try out the different driving styles of each car, and finally there’s a short training mode that teaches the player the basics.

The gameplay is pretty straight forward, bash opponent cars, while listening to kickass heavy metal, in a cardboard arena. The beauty of the game is in the simplicity, and it most definitely is a gorgeous work of art.

Concept Destruction is a game I can definitely recommend for old school car combat fans, as well as new comers to the genre. And this masterpiece gets a score of 9/10 from me.

Concept Destruction is developed by the talented people at Thinice Games, and can be purchased on the Nintendo eShop here

Special Thanks to Ratalaika Games for the review code